7 secret corners of Ibiza to visit

7 secret corners of Ibiza to visit 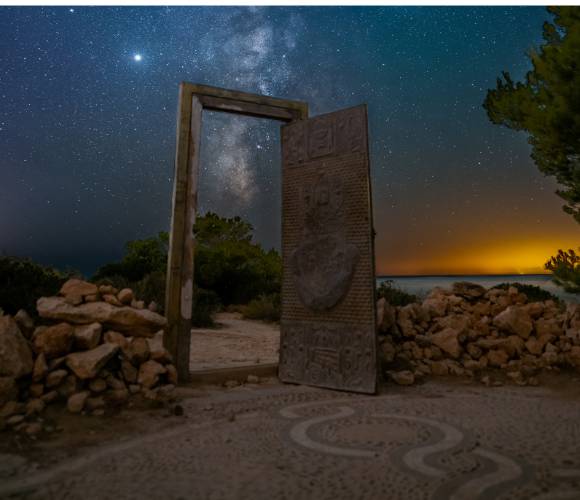 Think you know all the secret corners of Ibiza? Trust us, we have some surprises in store for you.

There are so many beautiful and unusual things to see in Ibiza that are off the beaten track and offer a special charm due to their seclusion. We really want our guests to discover them, though, so that you can have a magical adventure in the Balearic islands, which is why we wrote this list for you!

Little-known places to visit in Ibiza

Some places are rarely advertised in the guidebooks on what to see in Ibiza but that have a peculiar attraction once people arrive, that leaves them speechless. Here’s just enough information to get you in the know on these hidden gems scattered throughout the Ibizan territory, so you can go exploring and see them for yourself.

The western area of Ibiza is home to one of the most surprising outdoor modern art monuments in Spain. Many sculptures were installed around the island after 2014 so not many people have seen them.

This first sculpture should definitely be part of your route past art galleries and through museums in Ibiza: a work by Andrew Rodgers that he made as part of his series of mega monuments Rhythms of Life. It was commissioned by one of the richest men in the world: Guy Laliberté, known for being the founder of the Cirque du Soleil.

Said to be Ibiza's Stonehenge, it is a work of twelve basalt columns arranged in a circular shape. The sculptor carved them all right there where they stand today. In the centre of the site there is another 24-metre monolith, higher than the rest, and whose head is topped by a 23-carat gold plate. To get to this place from Ibiza, take the road towards San José and, when you reach the town, take the turn for San Agustín towards Cala Llentia.

2. The undiscovered doors of Can Soleil

Nearby Can Llentia, a huge gate is located on the Can Soleil plot, which is also owned by Guy Laliberté. There is not a lot of information about the artist behind this spectacular work of art, but they are two large doors made of wood with imposing frames and precious Arabic engravings. One of them was decorated by a hand of Fatima until it suffered a robbery. There are also mosaics created from a mixture of tiles, sand, and stones on the ground surrounding the doors.

What makes these doors so magical? Well, if you look from the right angle through the doors, you can see Es Vedrá in the background. The Es Vedrá islet is, without a doubt, the most magical corner in Ibiza. From here, you can also enjoy the views of one of the best beaches here, Cala Llentia. Breathtaking!

3. Atlantis Ibiza, a dreamlike journey to the secret places of Ibiza

This spot is not on the classic list of what to visit in Ibiza, but it is well worth exploring its dreamlike landscape to the southwest of the island. It is made up of amazing rock formations that are home to symbols and marine shapes carved into the rocks. Popularly known as Atlantis, Sa Pedrera de Cala d'Hort does not contain the remains of any lost civilization, but rather those of an old quarry where the characteristic sandstone of the Balearic Islands was extracted.

Atlantis houses a peculiar history among its rocks that began around the 16th century, when the extraction of the stone was carried out. This stone forms part of the walls of Dalt Vila and the Castle of Ibiza, which are currently World Heritage Sites, delegated such by UNESCO.

In the 1960s, with the arrival of the hippie movement on the island, Sa Pedrera de Cala d'Hort was the place that many chose to search for peace and harmony. And this is what’s reflected in the rocks, where there are sculpted fish, Buddhas, magical words, peace symbols and flowers, to name a few carvings. It was precisely the hippies who baptised this area “Atlantis”, due to its mysticism, proximity to the sea and the energy emanating from it.

4. Es Culleram Cave: one of the top places to visit in Ibiza

In the area of Sa Cala de San Vicent, 150 metres above sea level but hidden between mountains and forests, you’ll find one of the most impressive corners of Ibizan archaeology: the Punic sanctuary and the Es Culleram cave. This, one of the secret places Ibiza has hidden from most visitors, is a site dedicated to Tanit, the Carthaginian deity of fertility and fortune. The Cathaginians’ impact can also still be seen in the old town of Ibiza, mixed with many other settlements’ cultures in Dalt Vila.

The historical value of Es Culleram Cave is unimaginable. The remains date from back to the 4th and perhaps even the 2nd centuries BC. Among the most important remains is a bronze plaque, carved on both sides with incarnations to Resph-Melkart and the god Tanit.

Es Culleram cave was declared a Site of Cultural Interest (BIC) by the Autonomous Community of the Balearic Islands, and since 1997 has been owned by the local council. The cave and sanctuary are two of the least-known places to visit in Ibiza, but that is the loss of those that aren’t in the know!

5. Cala Vedella: a hidden gem among the places to visit in Ibiza

To the southwest of the island is a wide beach with white sand and a family atmosphere, protected on the flanks by spectacular cliffs. Cala Vedella is, in fact, a cove and also one of the island's natural harbours. The large pool created by its cliffs affords a large area for fishing boats to mingle, and is lined by rustic, picturesque boathouses on the right bank.

If you love moody and dramatic photography of constructions surrounded by imposing cliffs, put Cala Vedella on your list of what to visit in Ibiza.

6. Cala Codolar: another of the secret corners of Ibiza

This cove is one of those little surprises that Ibiza has tucked away on its west coast. The intense turquoise colour of the sea here, further heightened by the absence of crowds and the beauty provided by the folds of the cliff edges, offer a pleasant corner to relax in an afternoon.

Being little known among the larger tourist circuits, you can enjoy a day at the beach here without any noise, only absolute calm. Enjoy the tranquillity of this secret place in Ibiza!

7. Es Canaret: unmissable on your tour of secret places Ibiza has hidden!

Es Canaret, one of the coves that sits near to Sant Josep de Sa Talaia, is one of the jewels hidden in the north of the island. Its transparent waters and the beauty of its coast are its most characteristic features, along with the curious access road through a private home.

This small corner of Ibiza was seriously affected by the fire that devastated much of the coast in the Benirràs area in 2010. Before the fire, the entire coast of Es Canaret was surrounded by a lush pine forest and today, the area has had time to regenerate little by little, but it remains sparsely populated. This is ideal if you want to get away from it all, and only see the hidden corners of Ibiza.

A monument stands on the path that leads to the cove, to recall the consequences of the fire on Ibizan forests. There’s nothing like learning and remembering our impact on nature, as you tour the most beautiful places to visit in Ibiza, in our opinion.

As you can see, there are lots of answers to the question what to do in Ibiza and so many secret places in Ibiza that you can discover while on holiday here. So, what are you waiting for?! Book your stay in an Invisa resort and make it the best trip of your life.