A day out at Ses Salines Natural Park in Ibiza

A day out at Ses Salines Natural Park in Ibiza 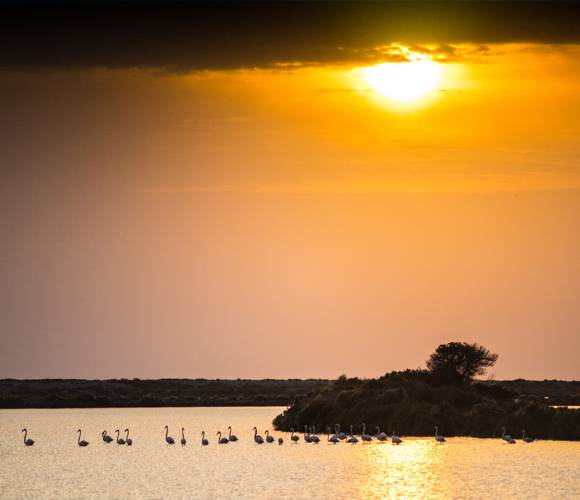 What do most people come to Ses Salines to see?

Few sites of such varied flora and fauna exist in the world that can compare to Ibiza. The island’s salt flats in particular are a fascinating ecosystem and wildlife-watchers’ paradise. Ses Salines Natural Park spans Ibiza’s old salt flats, those of Sant Josep de sa Talaia, the salt flats of Formentera, and also thousands of hectares’ worth of sea joining Ibiza with Formentera, known as Es Freus.

A day out at Ses Salines natural park is a nature-lover’s dream. The fact that it encompasses both land and water habitats means it’s home to nesting, hibernating, and migrating birds, including the tallest of all birds, with some of them being up to 5 feet tall—the flamingo. You may know that Flamingos love large alkaline or saline lakes with minimal vegetation so of course, this species of bird makes a stop over at the Ses Salines natural park once or twice a year. In August-September time you’ll spot them in the marsh and decantation lakes near Ses Salines beach.

Ses Salines beach Ibiza isn’t just for bird-watching, however. At the southernmost point of the island, you’ll find what’s also known as Las Salinas beach. Here, the white sands and turquoise waters that characterize the Balearic islands are surrounded by pine trees. The forest and beach juxtaposition attracts plenty of swish tourists and locals, enjoying surfing and snorkeling in the clear sea, or tucking into the fresh gourmet food to be found here.

We’re especially grateful to have this habitat in all its glory and open to the public because it was in danger just over a decade ago, in 2007. The merchant ship, Don Pedro, collided with the Es Daus islet and the 150 tons of oil it had on board for its own fuel was dumped into the sea. Surrounding beaches and Ses Salines Ibiza were all affected by the accident.

It took the authorities 14 days to clear up the beaches and natural habitats but the shipwreck remains underwater, near to the islet. The silver lining is that divers can now swim down to see all sorts of marine life, endemic to the Balearic islands, which now live on Don Pedro’s wreck.

While visiting this beautiful part of the world, tourists are welcome to observe the flora and fauna, take pictures and enjoy a picnic responsibly amid the stunning landscapes. If you venture away from the iconic beach where bars and restaurants are plentiful and lively, tour guides will recommend taking your own snacks and water to stay hydrated. To take a guided visit to Ses Salines of Ibiza and Formentera, routes through the natural park will explain the location’s cultural value and even economic contribution to the island over centuries.

You can take free tours from the island of Formentera, meeting at the Estanyets car park on Thursdays at 10 am. This walk lasts 2.5 hours so will leave you free to enjoy the many other delights of the area during your day in Ses Salines.
To get to Formentera if you’re staying at one of our hotels in Ibiza, ferries leave every half-hour from Ibiza’s marina, with very reasonable ticket prices, especially for families and groups.

What else can we do in Ses Salines natural park?

Here’s a rundown of the other best bits in and around the salt planes, if you plan to make more than a day of it in Ses Salines!
1. Sal Rossa and Ses Portes watchtowers
These defense towers date back to the 16th century and continue to watch over Ibiza’s residents and local fishermen.
2. The salt mountains
Ibiza has been producing salt since Phoenician times. Today, a gourmet Ibizan export, you can see it piled high, forming impressive mountains just a little inland from the beach.

3. Es Cavallet beach
Away from the Bustle of Ses Salines, Es Cavallet is a quieter and nudist beach.
4. Villages of Sant Francesc de S´Estany and Sa Canal
Pop over to Sant Francesc de S´Estany’s church from 1785 and its small village on the road to Ses Salines. There’s a statue here of a salt gatherer as a reminder of the economic importance of protecting Ibiza’s salt planes. Sa Canal’s village is the embarkation for cargo boats. Here, the railway tracks that used to transport the salt for exporting still remain, so it’s an equally historic spot.